Coffee cans... mid-century at its best

The other day I had the pleasure of seeing a lovely collection of coffee cans, which are straight sided cups introduced in the early 1960s. It's great when a collector focuses on one range and you get a whole lot of allied objects - thanks Jeremy Ashford for this treat. Just look at this gorgeous thing! 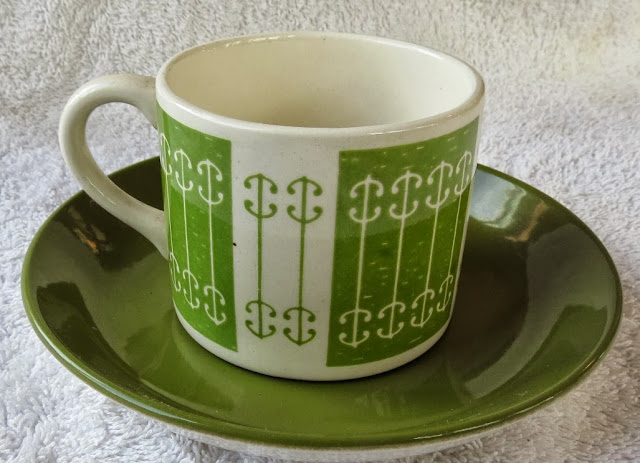 This set has a Kelston Potteries backstamp, which is relatively unusual. Jeremy also has a brown version of the same pattern.

Many coffee cans are marked with Cook & Serve, a brand which was introduced in 1963 when a heat resistant clay body was first developed.  The first Cook & Serve coffee cans were Blue Tango, Allegro, Image, and Mogambo - used in a Gregg's Instant Coffee advertisement. At first they were hand painted; later transfers were used. 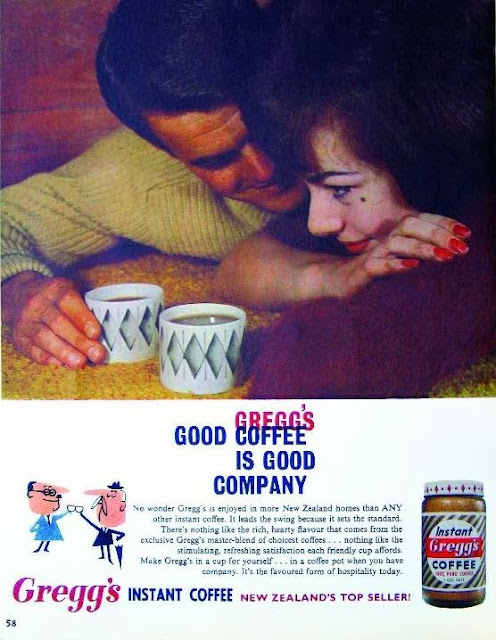 I remember the Gregg's coffee advertisement, it seemed so very sophisticated and romantic when I was a young(ish!) girl.
Below is Blue Tango, an entry by Emilie Beuth in the Crown Lynn design competition. The pattern was later used on all the Government-owned Tourist Hotel Corporation china. It first appeared in the Chateau Tongariro in mid-1966. Blue was used in the North Island, burgundy in the South Island. 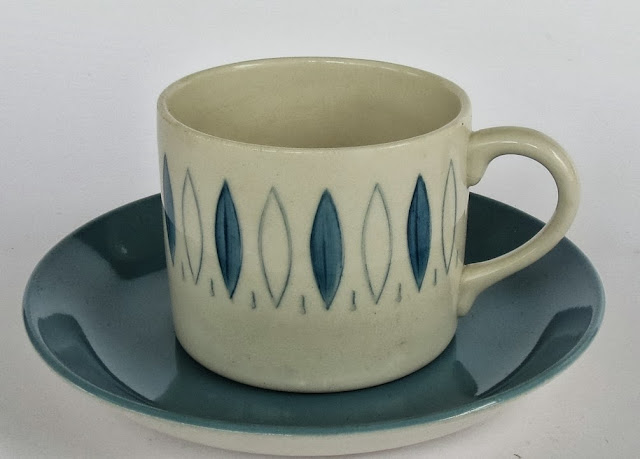 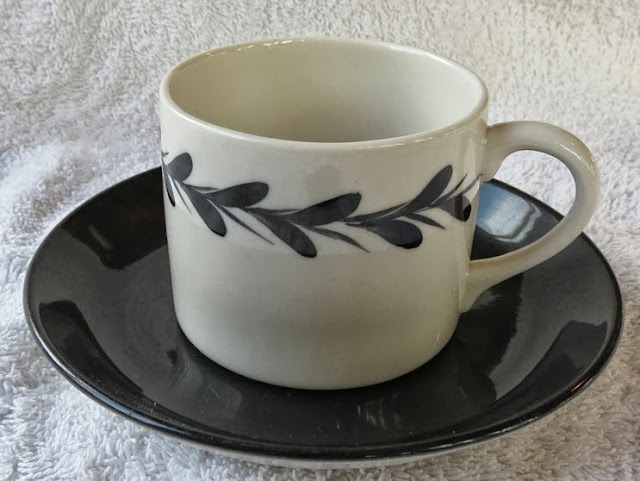 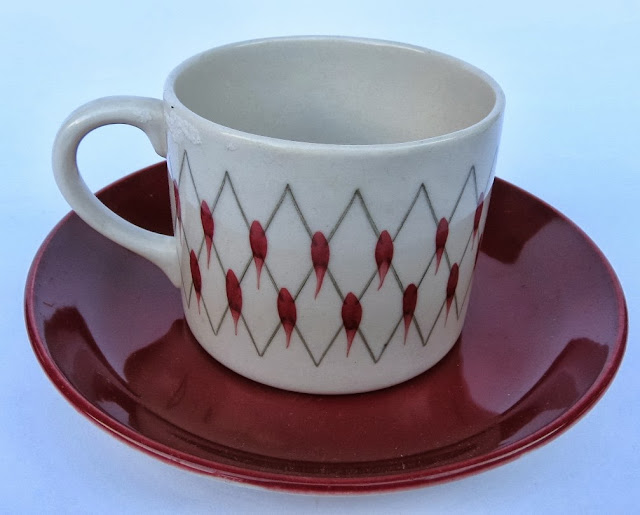 And this pattern -I've forgotten its name - shown here with a green cup. There was also a cup in the same pattern as the saucer but I think this combination looks better. 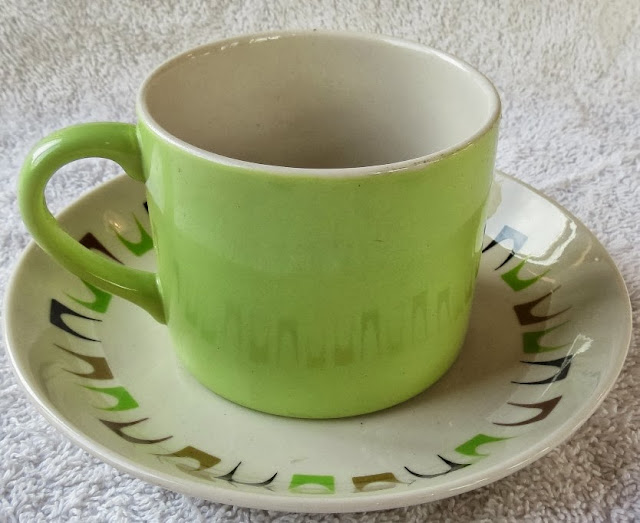 NOTE - when I first did this post, I had the pattern above described as Napoli, but I got that wrong, it's called Form.

This is Napoli, a very close imitation of a Swedish Norstrand pattern - of which more next time. 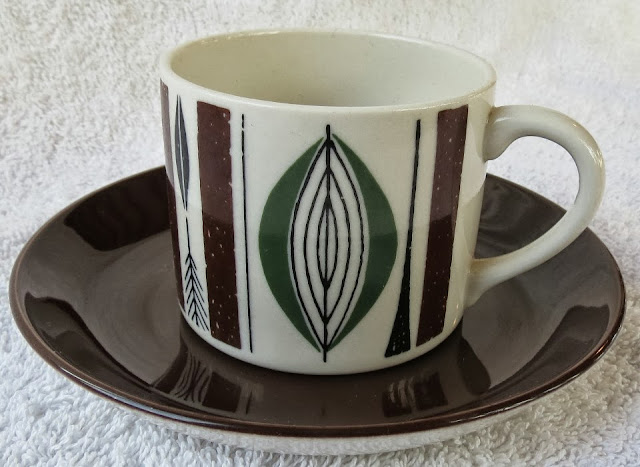 The Napoli backstamp is interesting - who were W.B and Coy? 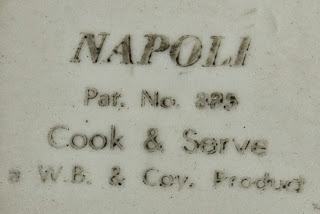 This is an Arthur and Martha cup, its backstamp is a different style from the others. (and it's a bit dusty - I should have been more careful!) 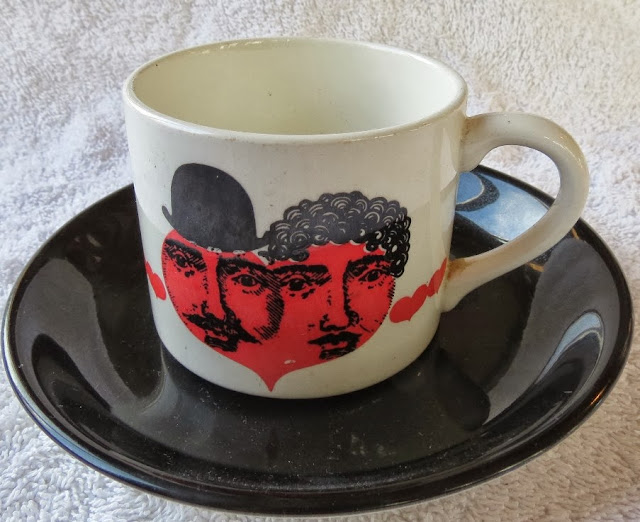 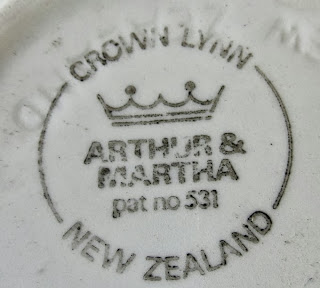 And this odd little number is Purple Myrtle, not easy to find, with a similar backstamp to Arthur and Martha. There is also a mysterious Captain Sharples mug in the same series - I have no idea who Captain Sharples was! 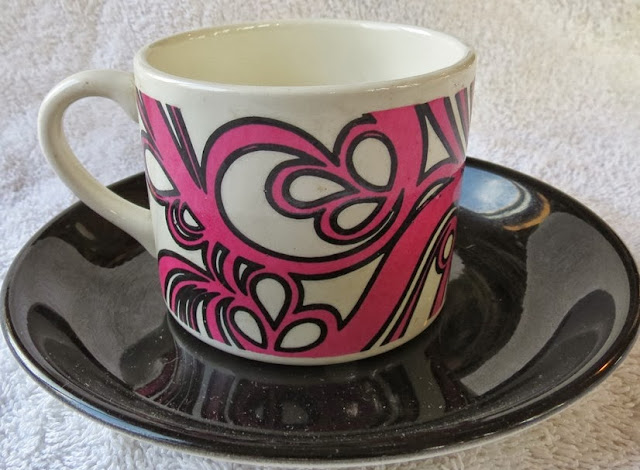 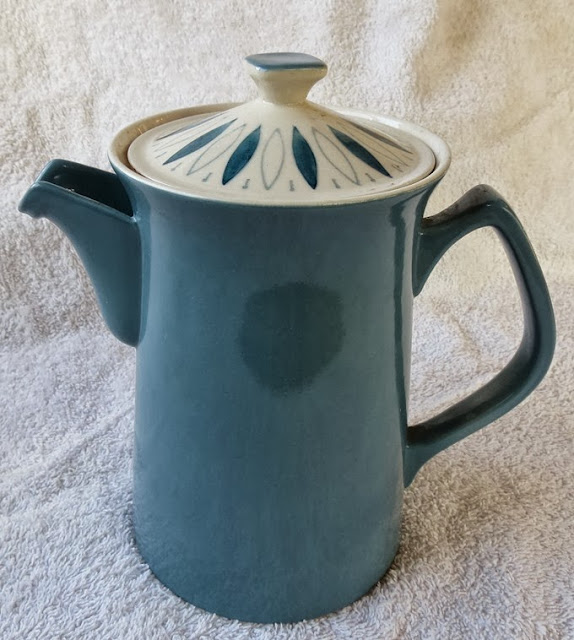 And lastly, here is a very oddly decorated coffee pot - goodness knows whose experiment it was... it would look so very much better in plain white. 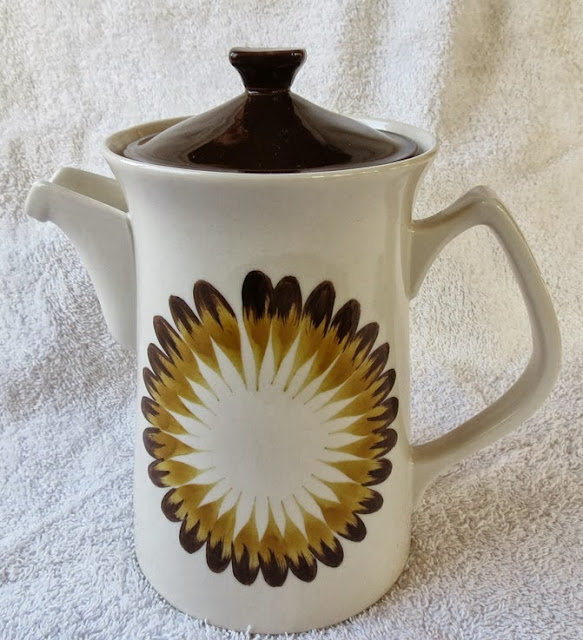 I guess experiments weren't always successful - and anyway it's all a matter of personal taste, isn't it?
NOTE - since I wrote this, Ev from NZ Pottery has pointed out that this pattern does have a name - Sunburst. So I herewith wash my mouth out with soap.... don't be so disparaging Valerie!
Next time I will talk about the crossover between Crown Lynn patterns and those from overseas manufacturers... there is a Cook & Serve pattern which is a direct replica of the Swedish Nortstrand product. And another in the popular Fleurette, a copy of Belle Fiore.
Take care till then... and remember it's only a boat race!
ValM

This is a Crossfords Kiwi Family plate - a cute pic but until recently I had absolutely no info about it, despite much googling and enquiring. 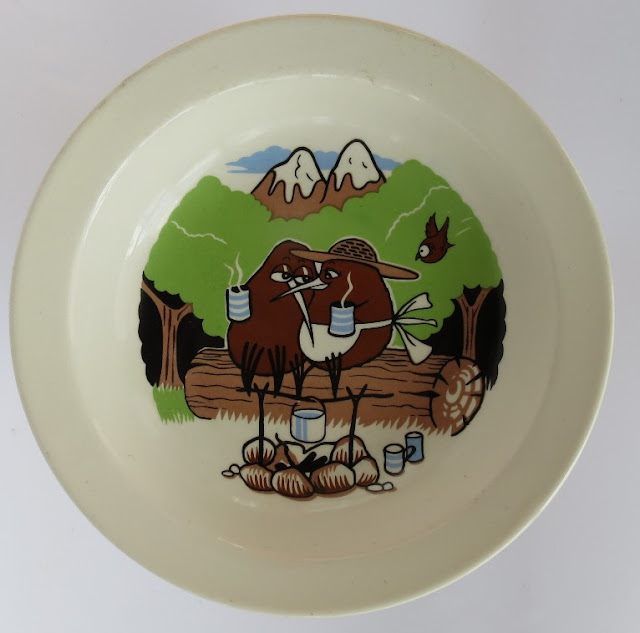 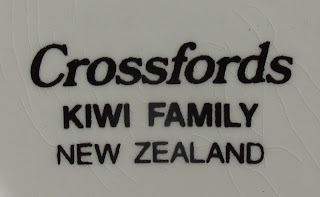 Then out of the blue I got an email from a friend who knew the person who designed it!  So here's the story of Bettina McCulloch and the Crossfords Kiwi Family.

In the early 1980s Bettina was a signwriter for Hugh Wrights Menswear shop in Auckland.  The small team worked from a studio in Exchange Lane off Queen St and in their down time they did design work for Crossfords, a nearby souvenir shop. Bettina believes that most of these plates were sold to tourists and are probably overseas - certainly you don't see many around.

During the early 1980s Bettina also designed a range of sew-on badges for Crossfords - here are a few examples. I saw one for sale on TradeMe the other day. 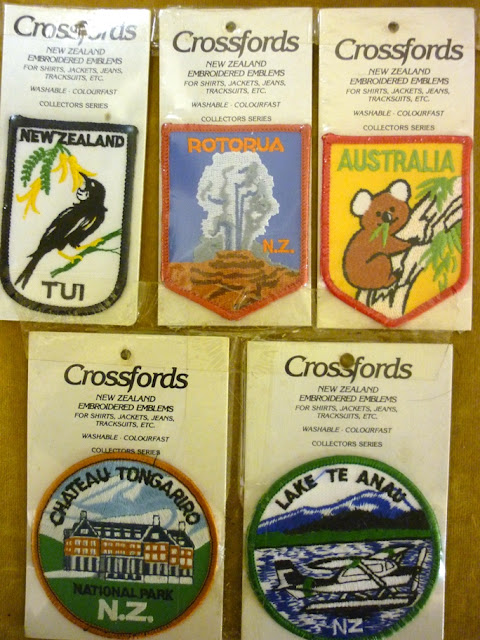 ﻿Since leaving Hugh Wrights, Bettina has continued with her commercial art work, among other things she has designed ceramic tiles and murals.

I believe I have also found an answer to the Syrem question.  On 4 November 2012 I devoted a whole post to items with Syrem backstamps. I could not of the life of me find out what Syrem meant - the only thing I found was obscure references in German... then the lovely Alan Topham, long-term Crown Lynn marketing manager and later GM, had a flash of inspiration - he believes that Syrem was an anagram for Myers, an Australian chain which he recalled had a department store in Wellington. This is a Teddy Syrem plate. 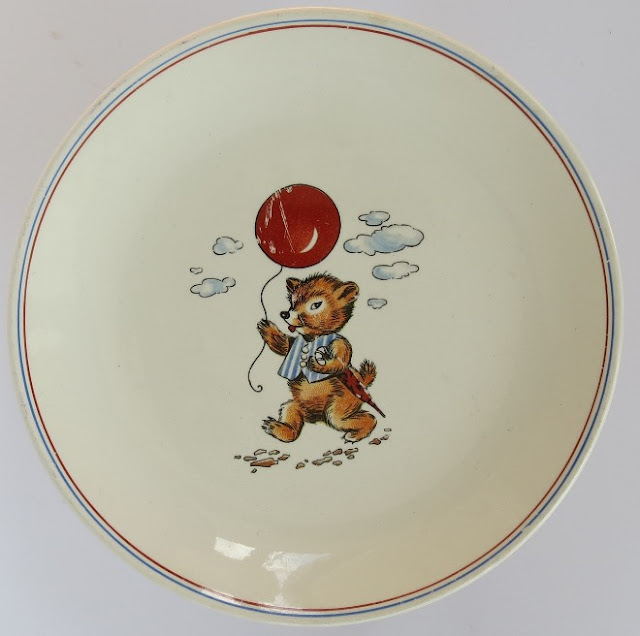 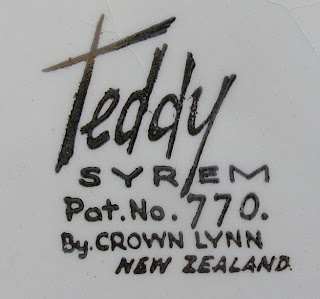 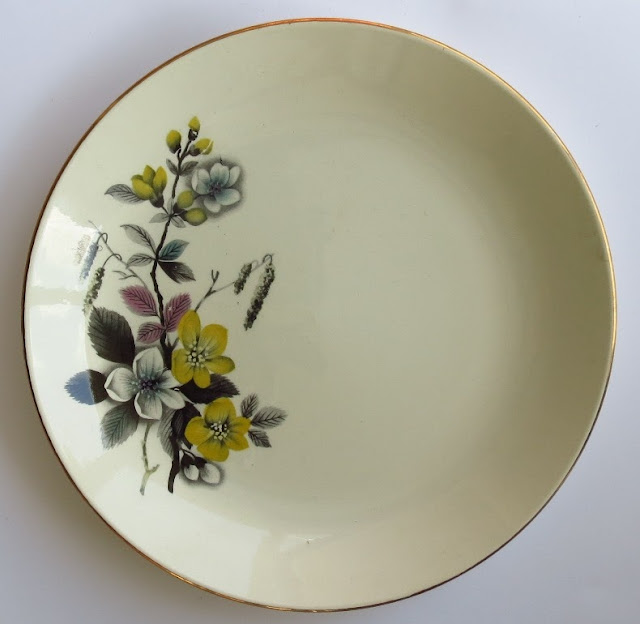 Note this later research from Ev on the NZ Pottery site:  Thought I had recalled seeing Myers in the Decoration Advices and took a look. How wonderful to find that Florida Pat.No. 957 was made for Myers in around 1965!! Ivy Leaf Pat.No. 979 is listed as a J. Myers Ltd Exclusive around 1967!﻿
Alan also enlightened me on another long-standing question - why are several Crown Lynn patterns named Sylvia - Sylvia Blossom Time, Sylvia Corvette, Sylvia Rose, etc etc. Alan told me that for many years Tom Clark had a secretary called Sylvia Dunbar, and these patterns may have been named after her - a nice thought!  Here are a couple of pretty Sylvia patterns. Once again, what lovely backstamps. This is Sylvia Blossom Time: 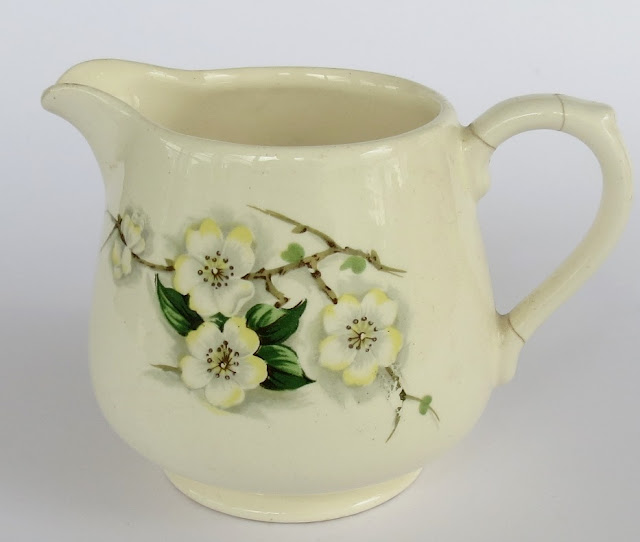 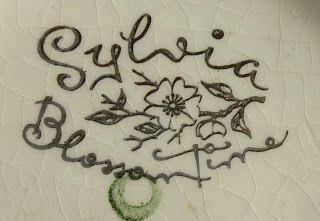 And here is Sylvia Rose Kelston: 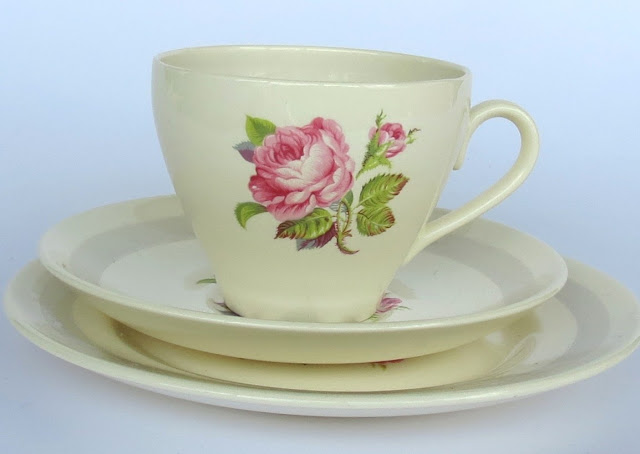 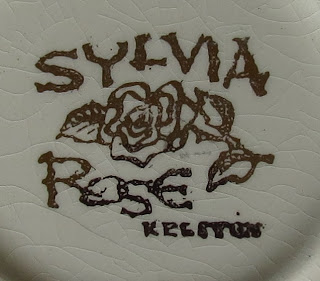