For years I have been meaning to do a post about Daniel Steenstra but I keep putting it off because I don't know enough. So I have finally decided to put down what I do know - we can always add to it later! I would very much appreciate any comments/corrections/further information on this post.. it has got a few assumptions, and more than a few gaps!

Meanwhile, here is a picture of Daniel Steenstra at work. It is taken from a large newspaper advertisement  - undated, but almost certainly 1960s. He was demonstrating his craft at the Crown Lynn shop in the Milne and Choyce department store in Queen Street, Auckland. 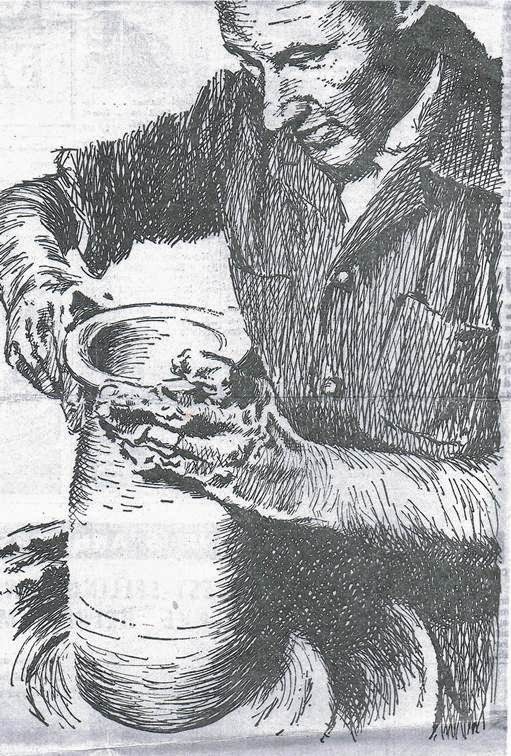 This is a vase which I am confident that Steenstra made and decorated. It was hand potted, then coloured slip was dabbed on to create a mottled effect. The horizontal lines are hand-incised grooves. He also made plant pots and lidded kitchen jars in the same style. 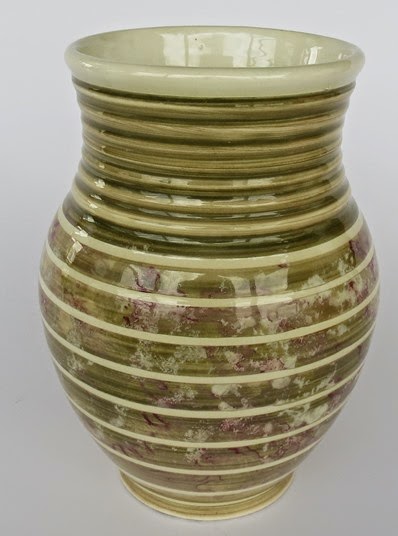 Another picture from the newspaper advertisement shows the types of vases Steenstra was making at the time. Imagine if you had all those on a shelf today...   The planter  in the top right hand corner is decorated in the same pattern as the vase above. 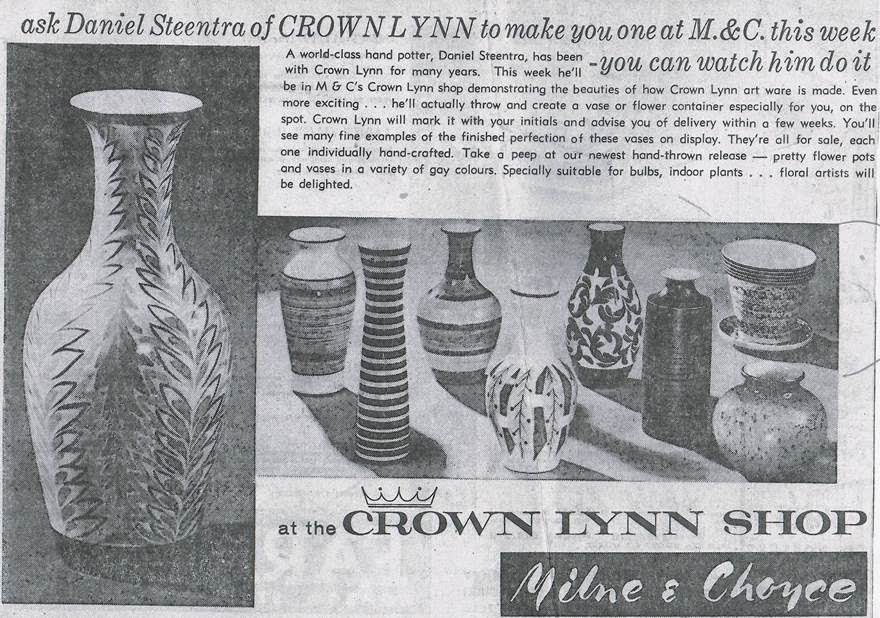 This link on the New Zealand Pottery site will take you through to a very interesting range of examples of work believed to be by Daniel Steenstra. (except that nothing in my records would indicate that he made the dogs shown in one post.)
Daniel Steenstra began work at Crown Lynn in 1953, and worked there for about 20 years. Occasionally during downturns he was put off, and had to find work elsewhere.  In the end, as Crown Lynn became more mechanised, his skills became less and less relevant and he moved to Beach Artware, a much smaller pottery.  He died in 2000 before I began my Crown Lynn research but in 2004-2005 I spoke to his wife Wendy and his son Dominicus, and also to Israe Paraone, who  worked closely with him in the 1970s.
For many years I have struggled with a basic conflict over Daniel Steenstra. Some people told me he decorated his own work; others said his vases were painted by Crown Lynn hand decorators such as Frank Carpay, Doris Bird and Eileen Machin. Happily, I think I am now a bit clearer about this question. One clue is in my interview notes with Israe Paraone, who  told me that Steenstra did paint his own work, and described his technique (see below).  My interview notes from Eileen Machin tell me that some Steenstra pots were hand painted by Eileen and her colleagues, while others - described as 'outdoor pots' were slip banded by Daniel on the wheel.
So my educated guess is that Steenstra decorated vases and planters in the style of my vase above, and that he also occasionally decorated other items, but most of his vases were hand painted by other people.
Everyone who spoke about Steenstra told me that he was incredibly skilled with his hands - and these are hands that Israe describes as 'rheumatic and broken and sore' (possibly from ill-treatment during the war in Europe).  Despite this, he could roll a cigarette one-handed, in his pocket. 'He would roll my cigarettes for the day – and look at you and grin.'
Israe described Steenstra's decorating technique like this: ' Danny would … mix up all the slip and glazes that go together in the weirdest way, use part of a torn old jumper, (as a paintbrush) and he would have two fish swimming underwater in the weirdest way...He was a very humorous, very talented, very funny guy. He had a quiet pride, he didn’t need the acclaim.'
Israe and Dominicus both told me that Daniel Steenstra helped the design team by making one-off samples as they were developing new shapes, and Israe said he also understood machinery and was a powerful innovator in how some of the processes at Crown Lynn evolved.
Both Crown Lynn founder Sir Tom Clark, and long-term finance manager and later GM Colin Leitch told me that Steenstra made lots and lots of very small items.  Many were decorated in white, said Colin. This little treasure, no more than 6 cm tall, was found by John Shears - thanks John for the photos. 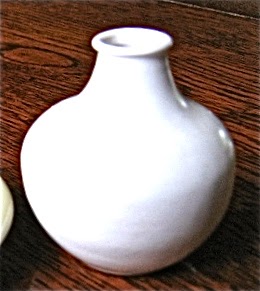 Steenstra's  skills were such that he could hand-pot a jar and lid, and the lid would fit perfectly without measuring; this is a highly technical skill. Sir Tom told me that Steenstra was 'the sharpest smartest thrower you ever saw in your life. Just throwing. One piece after the other, boom boom boom ....he was a very hard worker. Did a tremendous job.'  However Sir Tom told me he fell out with Dan Steenstra over money - he wanted more pay than Tom was prepared to give.

It is generally believed that these larger green vases with white dots were also made and decorated by Dan Steenstra, though I have not yet seen any documentation to confirm this. (photo thanks to Geoffrey and Brenda Clark). I have read that there were eight different vase shapes in this style. 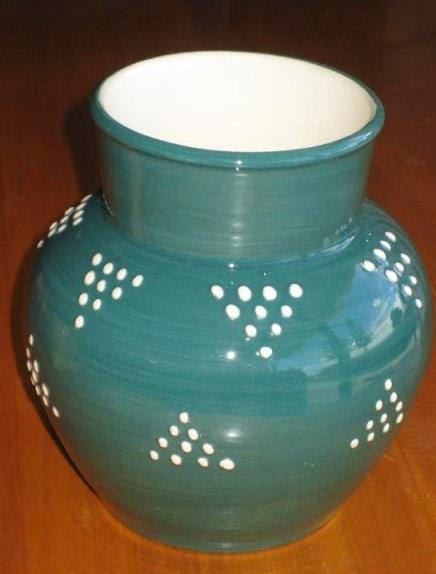 Lastly, I have a handful of other small vases which I believe were made by Daniel Steenstra though once again I have no proof.  Somewhere I have a note that he made little 'baroque' vases - but for the life of me I can't find that note now when I need it! At any rate, here are my small vases, the largest is only 8 cm tall. This is not the first time these vases have appeared on this site.. forgive me, but I do love them! 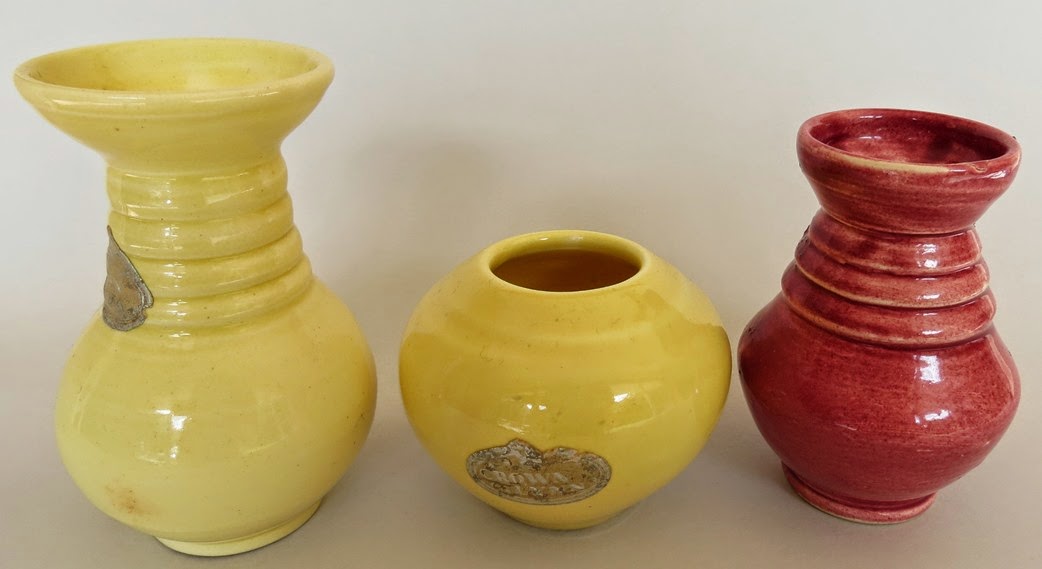 So. I hope that as time goes by we can put together more and more pieces of the Daniel Steenstra puzzle. He is one of the many unsung heroes of Crown Lynn.

NOTE... After I posted this, Ev from the New Zealand Pottery site gave me a link to the Auckland Museum Library site, which has some photos of Daniel Steenstra at work.  It's a bit tricky - click on the link below, then click on the listing for Crown Lynn, then you  will see eight pages of listings of photos etc. The pics of Steenstra are on pages 7 and 8.
http://muse.aucklandmuseum.com/databases/librarycatalogue/P5206.detail

But now it's stopped raining (finally) and I am going to see what's left in our vege garden after a week of rain and wind and rain and wind...

MADE IN NEW ZEALAND... my favourite dinnerware patterns

I have been digging through my boxes in preparation for my giant Crown Lynn garage sale... yes it's time to clear out a bit of space in our shed!  Anyway, that won't be for a couple of months yet.  But it has made me think about what I like and why.  And Nirvana, perhaps surprisingly, is my all-time favourite.  It's so very New Zealand, based on our pohutukawa flowers.  And just look at the glow in that background glaze. I don't know who designed it; probably Crown Lynn's long-term in-house head of design David Jenkin.  The desert plates in my set are the plain sandy colour. 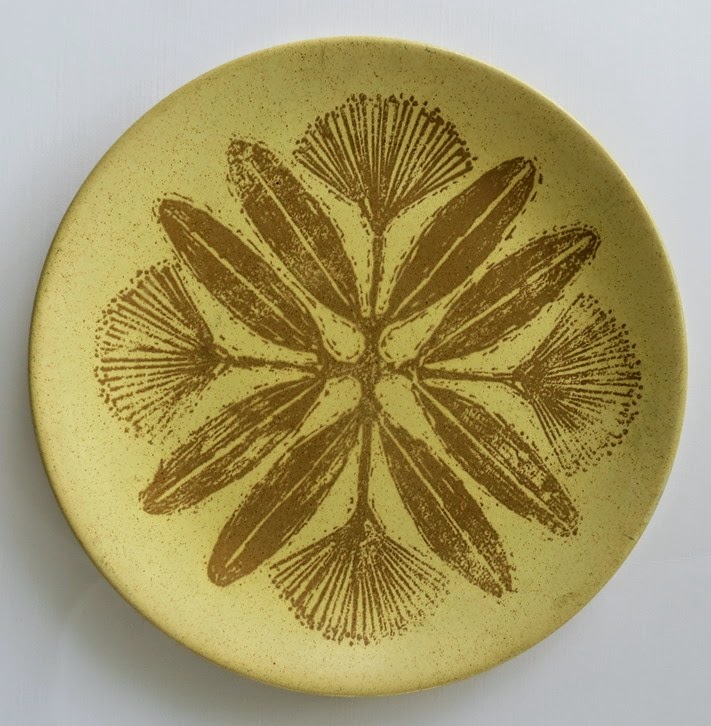 Sadly, George has not yet come round to my way of thinking on this one, so my Nirvana dinner set remains in the garage. But I won't be selling it. 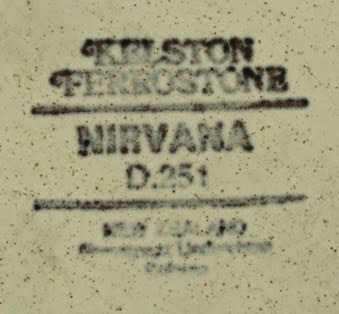 Second on my list is the cool elegance of Four Seasons... and this pattern gets a bonus point because of the lovely quirky backstamp. This is one of several banded patterns which were made by spraying coloured slip (liquid clay) onto the unglazed ware then overspraying with clear glaze, which makes for a very durable finish. Other banded patterns, released around the mid-1960s, were Hacienda and Carousel.  I wish I'd gathered up more Four Seasons when it was still around. Now you never see it, at least not at prices I am prepared to pay. 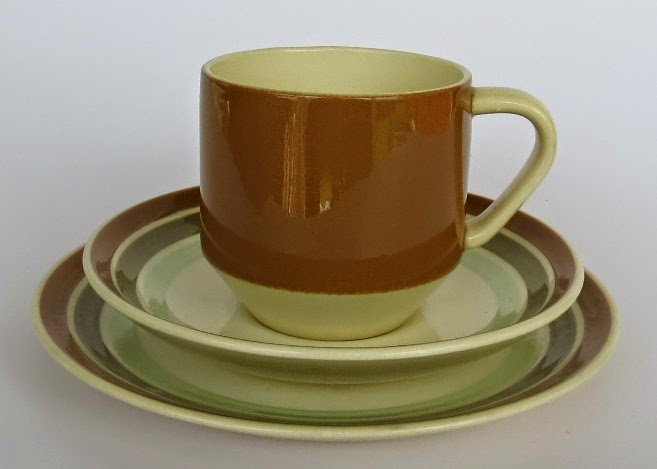 And here's my all-time favourite backstamp. 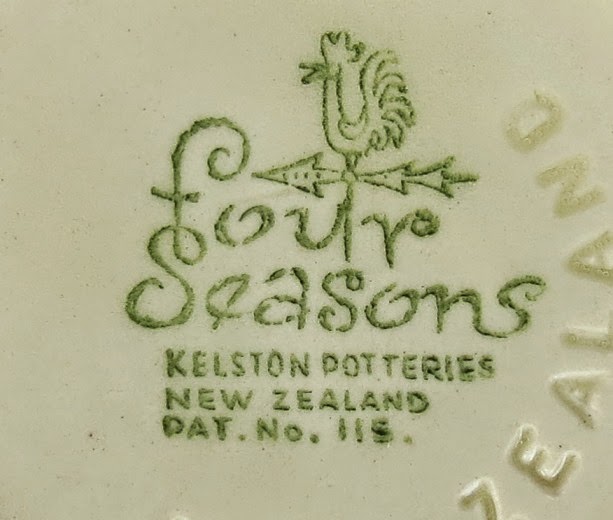 Next on the list has to be Echo. Once again, I have a full dinner set in the garage and he-who-must-be-obeyed is not keen on it. Oh well, I won't be selling it so I hope my descendants like it.  Echo was designed by Mark Cleverley, newly recruited to the Crown Lynn design team and described as drawing the design with 'reckless abandon' to appeal to the 'flower power' generation. Released in 1969, it proved to be one of the best sellers ever, and is one of the most instantly recognisable Crown Lynn designs. 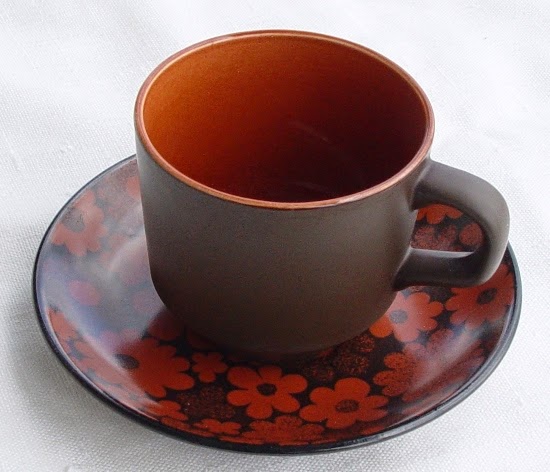 Then there's Apollo. Simple fluted white, durable and - unlike many dinnerware patterns - very unobtrusive to eat off. In the past couple of years, the once ubiquitous Apollo has all but disappeared from op shops... I guess I'm not the only one who appreciates it. Apollo was released in 1969, and named to commemorate the first landing on the moon. 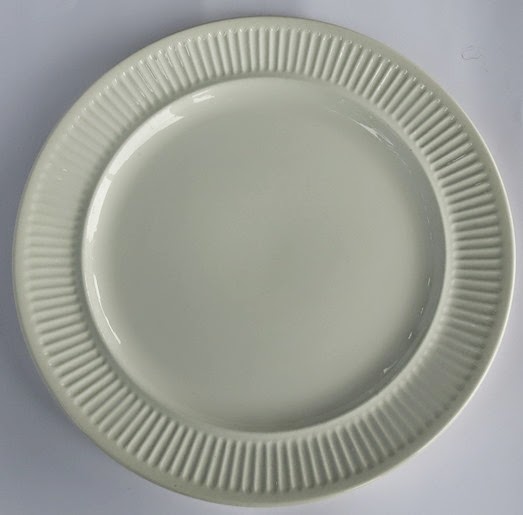 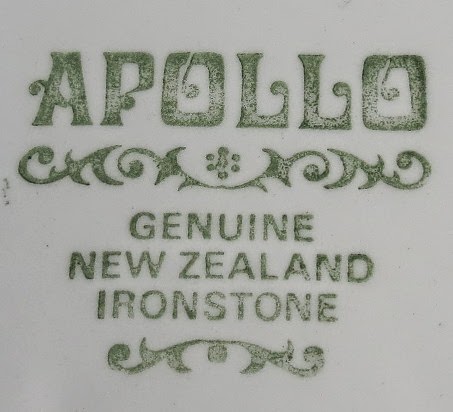 Yucatan, designed by Robert Drake, is another favourite. The late 1960s were outstanding years for Crown Lynn design, this pattern was released in 1968, the year I got married. Uncle Graham and Auntie Pam gave us a full dinner set for a wedding present. I wish I'd kept it in its box instead of using it; now I only have a few battered relics.  The cups and bowls were plain grey. 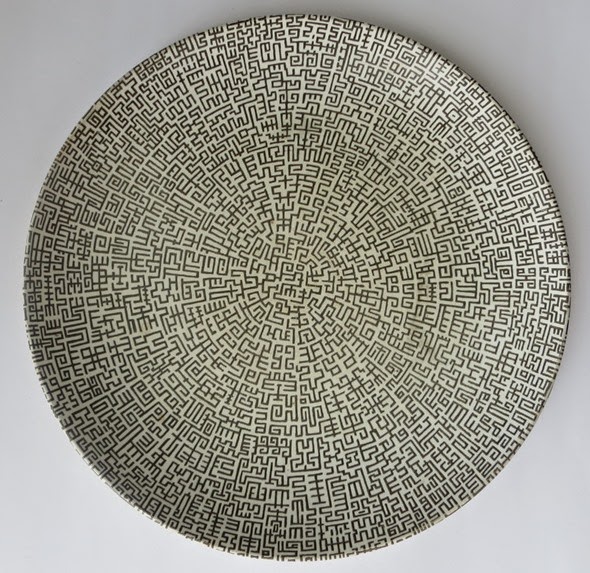 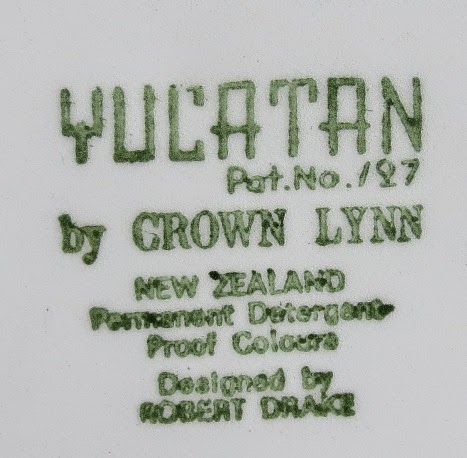 ﻿
By the mid-1960s, Crown Lynn was in full production, using the automated Murray Curvex machines to print in-house designs such as Yucatan and Echo. These machines used a gelatine 'bomb' - a sort of half-sphere with a jelly consistency, to transfer ink from an engraved metal plate to unglazed bisque ware. It revolutionised production, both in terms of speed and also because it gave Crown Lynn the ability to decorate flatware without the laborious hand-application of transfers.  (The popular Autumn Splendour is a well known pattern which was applied as a transfer.)
This pattern below is another I am very fond of - and it too is very hard to come by.  It's an earlier pattern; its "British" backstamp and the shape of the plate places it in the 1950s or very early 1960s. I love the turquoise glaze, and the simplicity. 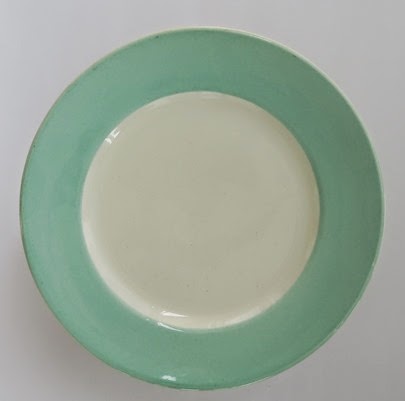 Crown Lynn used "British" backstamps in an attempt to hoodwink New Zealand customers into believing they were buying English-made ware. 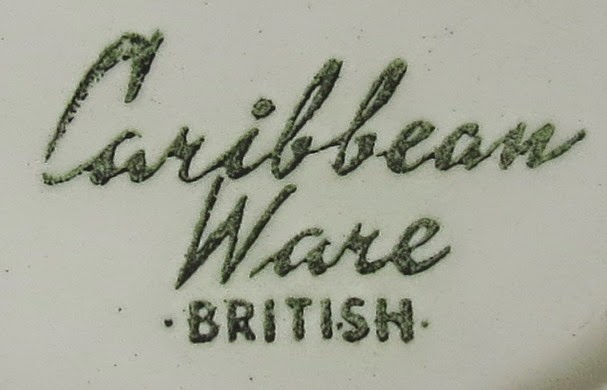 And - last but not least, this plate at first glance looks like a big brown blob, but let me tell you this is very classy. It was designed by David Jenkin and Mark Cleverley in 1977 for the Bellamy's restaurant in Parliament Buildings. The very stylish MP Whetu Tirikatene-Sullivan oversaw the process, and the end result was a stylised Maori fish-hook design with an amazingly rich finish. This photo does not do it justice; in the real thing you can see rich purple shades glowing in the varied shades of brown. I have only ever found one plate, and it's another that won't be in the garage sale! 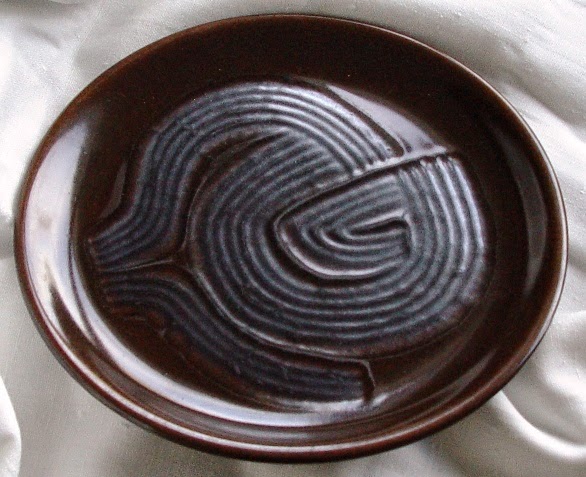