Before I get going, a quick clarification. In the recent book about Mark Cleverley, author Jonty Valentine speculates that I might be writing yet another Crown Lynn book.  It's true that I wanted to record another interview with Mark, which I have since done, but that interview was never intended to be the basis of a book.

Anyway. Onto another bit of lovely Crown Lynn history.  This post is to introduce you to some of the early yellow ware made by Crown Lynn (then known as Ambrico) in the late1930s and through the 1940s.

In our recorded interviews when I was writing my first book, Tom Clark told me the story behind this yellow ware.  In the very early days, when he and his very small team were working out how to make household ware instead of bricks and pipes, they used a yellowish clay body which was all that was available at that time. They were not satisfied with this, and a huge amount of work went into developing a clay body that would fire to a pure clean white.  If you look at the later Crown Lynn dinnerware you see that they achieved that. Apollo for example is finished with a clear glaze over the plain white clay body.
Tom and his team eventually found the vast white clay deposit near  Matauri Bay in Northland, which became the mainstay of their production right through until the factory closed in 1989.  The Matauri Bay clay mine is now owned by overseas interests.

Pottery clay is complex - often many different ingredients are mixed together to form a white, solid, durable product once it is fired in a kiln. A mix that looks white while it is wet can turn yellow - or worse a muddy grey - when it is fired. Or impurities may show up. Many of the early products were marred by speckles of black iron pyrites. The first whitish clay body was developed around 1948.


This jug is a classic Crown Lynn shape - and it's a muddy colour rather than a clear yellow. The base is unmarked. Height 9 cm, width 9 cm. 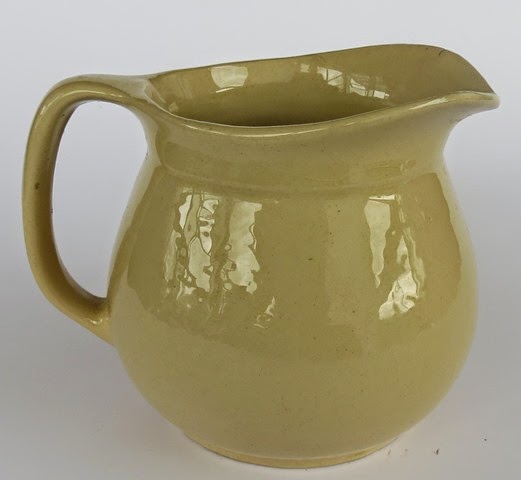 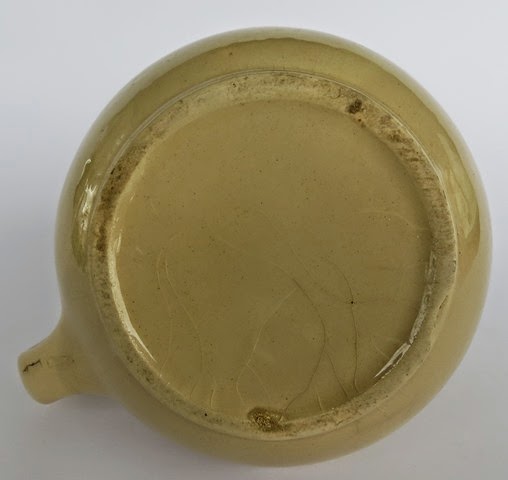 Because it is not as sought after as the later dinnerware - and because some sellers don't realise what it is - you may still be lucky enough to pick up the odd piece of this yellow Ambrico ware. Much of this early product is unmarked. Other pieces have the simple 'Made in NZ' backstamp.  This cup is a nice shade of yellow, again that's from the clay body. It is finished in a clear glaze. Note the 'block' handle, which is joined to the cup from top to bottom.  This style of handle stuck to the cup better than the later 'ear' shape which was joined only at both ends.  Again the base is unmarked, with a grainy finish which is quite common with this early ware. This cup is 7.5 cm high and 8 cm across the top. 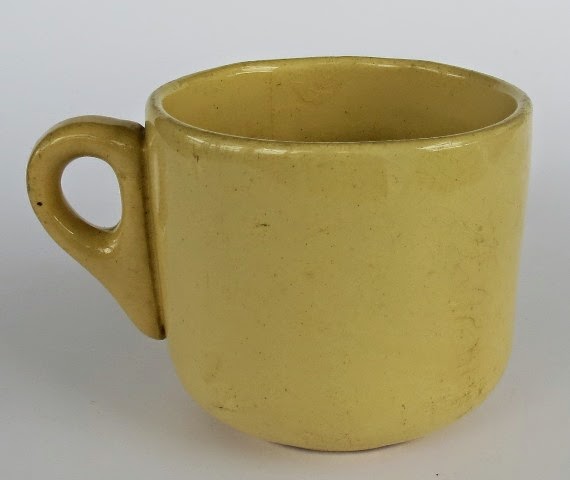 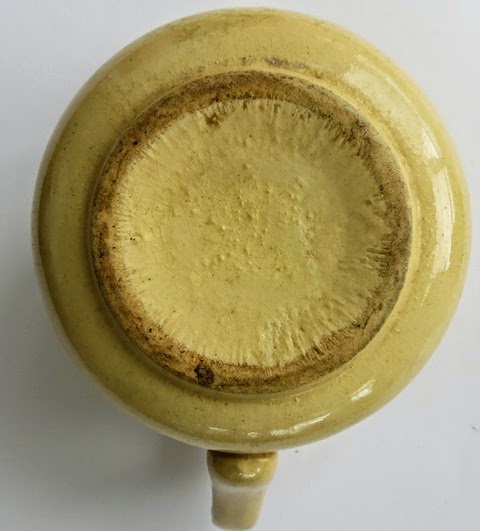 Below is the lovely early 'Paris' design dinnerware with its distinctive ridges. You could write a book about this ware alone, if only someone was still alive to tell us about it... So far as I can work out, Paris ware was made first with hand-jiggers, then during the 1939-45 war it was made with a complex machine built in-house, which was never completely successful. I believe the same style was made later using machines imported from England. You see Paris ware in the early yellow clay and also in the later whiter clay. The saucer  is 15 cm across, cup height 7 cm, width across the top 8 cm. 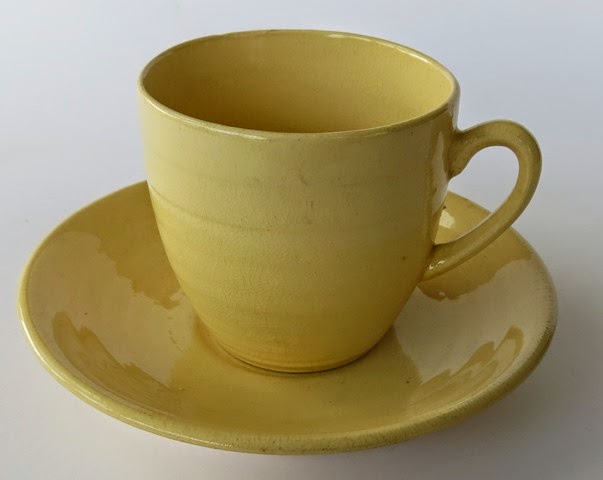 This cup and saucer have different variations on the Made in NZ backstamp, indicating they are not a matched pair, but they would have been made around the same time. 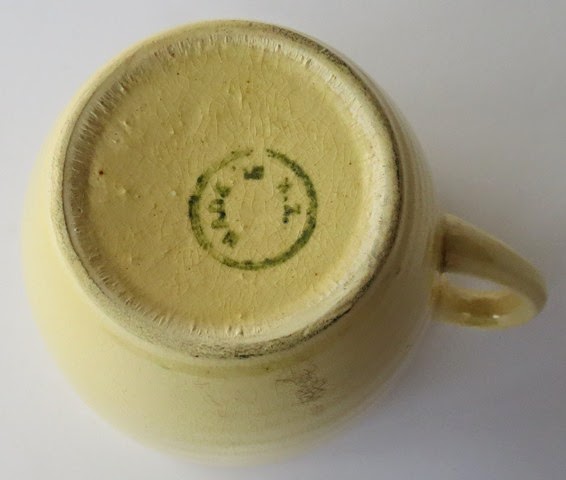 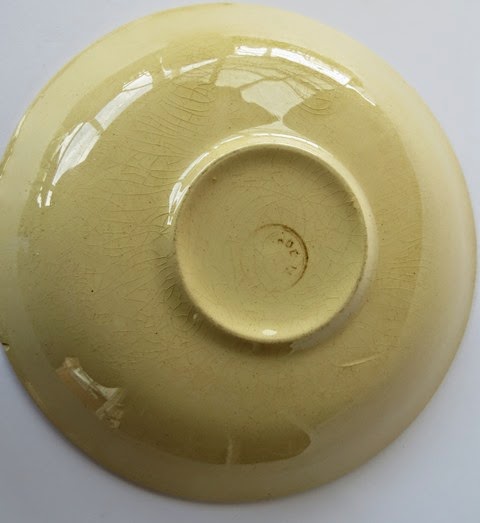 This is one of my prized pieces - a very old yellow kitchen mixing bowl.  Height 11 cm, width across the top 25.5.  It is in surprisingly good condition, considering the amount of use it was no doubt subjected to. 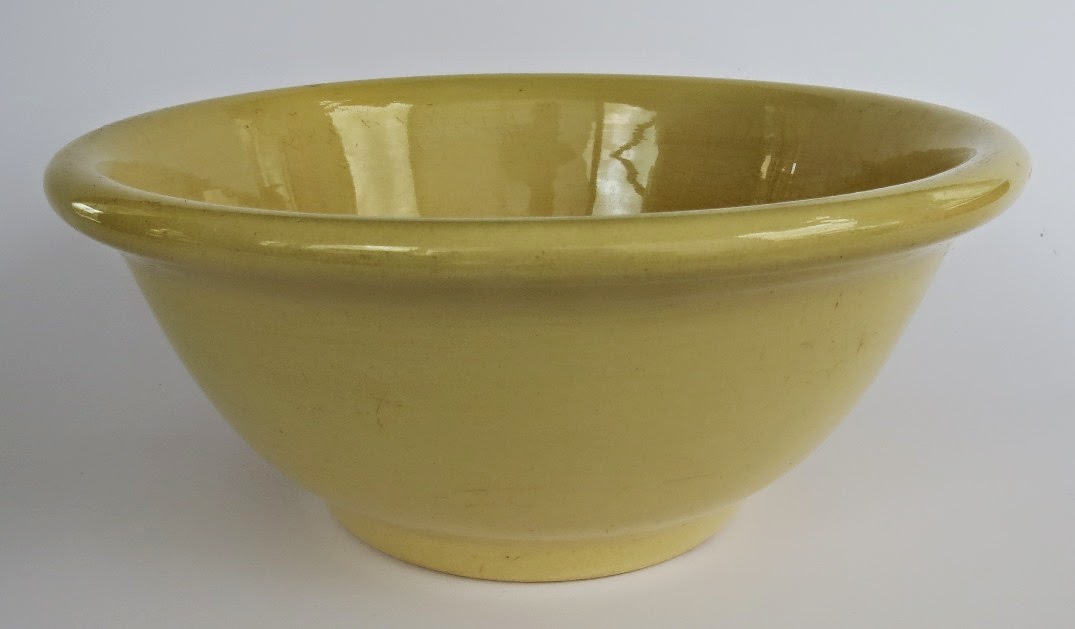 And in a similar style, here is a chamber pot, made for the days when we had outside toilets.  I once saw one of these advertised as 'a sort of a bowl with a handle'. Love it!   Height 11 cm, width across the top 23 cm. 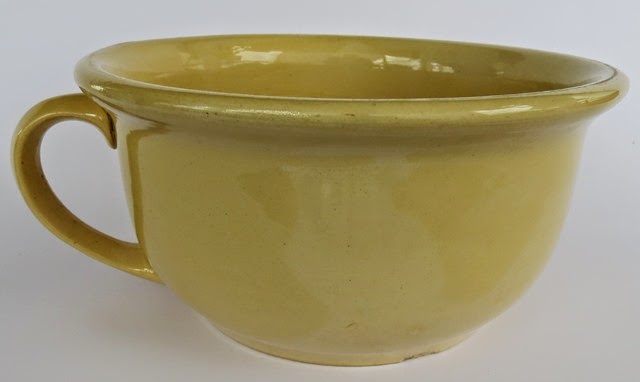 The base of the chamber pot is completely unmarked, but the pot is a distinctive Ambrico shape. 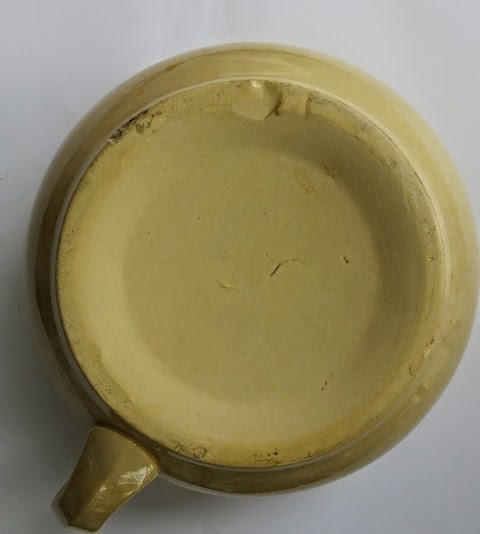 Here's another old-fashioned item, a shaving mug.  This is a particularly early version. It is 8 cm high. 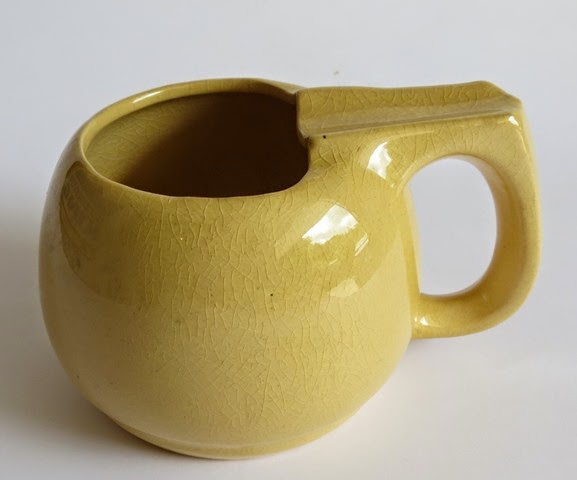 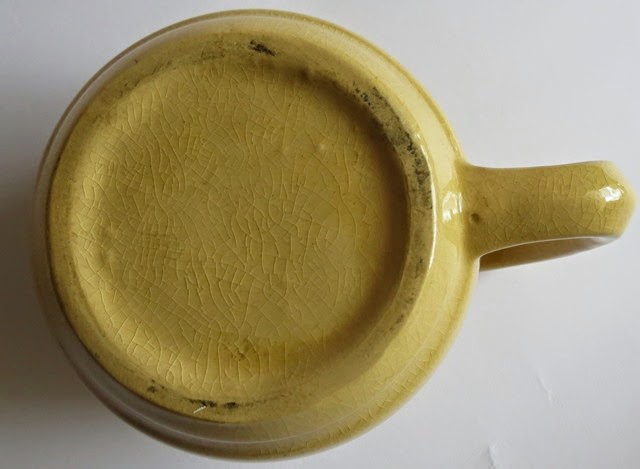 Later shaving mugs are in this shape. You can see that by this time they had developed a whiter clay body.  This example is 8 cm high. You often see this shape decorated with transfers or - occasionally - hand painted.  Those styles of decoration were not in use until the very late 1940s. 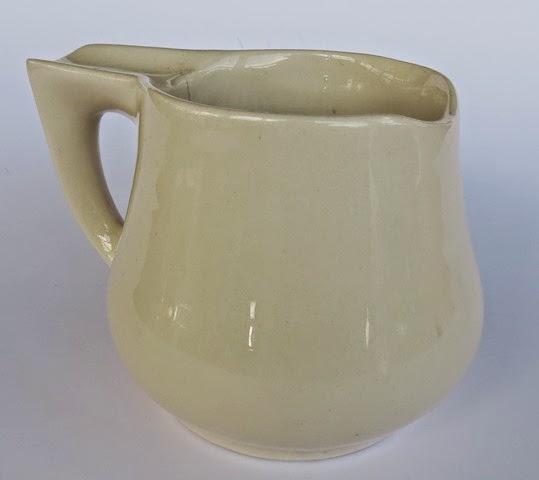 At a quick scan, this post may seem to lack colour, but please think about the huge amount of trial and error, and pure effort, that went into making Crown Lynn (then known as Ambrico) in those early days.  One of the reasons Crown Lynn is so respected today is because it kept getting better and better - Tom Clark never allowed his team to stand still.  Even after the Matauri Bay clay deposit was discovered, the search for good clay continued.  Tom's wife Patricia told me that on their honeymoon he would stop the car and jump out and dig a piece of clay out of the bank... and put it in his mouth.  Good clay is smooth - and tasting it is a quick and easy way of testing for grit.