I have to confess to a mistake in my Crown Lynn Collectors Handbook. On page 136 there is a photo of a Pania of the Reef lamp base which is not Crown Lynn.

EDITS -  one of my readers - Karen  has shed some light on the likely origins of the Pania I discuss below.  In the catalogue of the Jim Durmmond auction of 22 April 2009, the very last listings are as follows.  (The numbers on the left are the lot numbers for the auction.)

Karen also provided us with a link to more information about the likely manufacturers, a company called Marble Art.

And this is the link to the Jim Drummond catalogue, which Art + Object auction house has generously retained on line for us.

Now  back to my original post - Pania on pg 136 of my Crown Lynn Collectors Handbook is not Crown Lynn!

It looks like it could be Crown Lynn, it feels like Crown Lynn, but there is absolutely nothing in the records that establishes that it is Crown Lynn.  Significantly, my researcher friend Ev Williams who has spent hours and hours sifting through the records which are now available at Te Toi Uku Crown Lynn museum, has found no reference to it.


The lovely little figurine with a New Zealand theme is almost certainly made by someone in NZ, but I have no idea who. 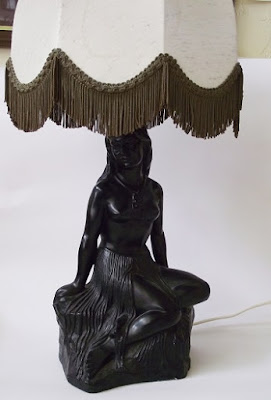 Recently I was sent a pic which shows one of these lamp bases with a little sticker "NZ REG. DESIGN 11549" stuck onto the green velvet base. Maybe a NZ design researcher will be able to track down a maker with that information.

It may not even be ceramic, though as yet we have been unable to find out what it actually is made of.  The owner of the one I photographed lives some distance away and I have yet to check it personally. 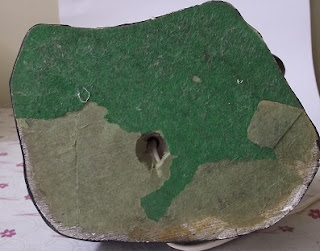 So why on earth did I put it in the book?  Believe me, I often ask myself that question.

Unfortunately I was shown it by someone who believed it was Crown Lynn, and I was so thrilled that I made a foolish assumption. The Three Faces of Eve lamp would have been a much more sensible example.

I must apologise to the Crown Lynn collectors who are seeking this piece for themselves - if you find one, by all means treasure it as a special piece of Kiwiana, but it is not Crown Lynn. And there are enough errors on Trademe without me adding to them!

That lamp is hopefully my most substantial error, but there are others.

Importantly, Crown Lynn designer Mark Cleverley told me of an error in my first book Crown Lynn a New Zealand Icon.  On page 108,  the Expo 70 Legend of Maui platter and the chopsticks fish hook were designed by Mark Cleverley not (as I was initially told) by David Jenkin. 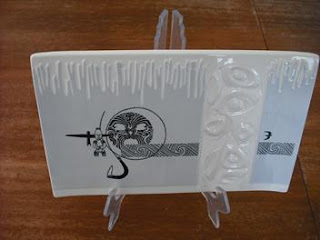 Like all researcher/writers, I do my best to thoroughly check and cross-check, but even so the occasional mistake slips through.


It's ok if the error is online, I just do a quick edit - hopefully before it is re-posted, but an incorrect statement in a book is much more serious because it is there forever.


Now - a few words on how I research. My work is based on interviews with the actual people who made the ware. For example I recorded over 11 hours of conversations with Sir Tom Clark, the founder of Crown Lynn, and many more interviews with people who were involved with Crown Lynn in various ways.  I transcribed those interviews and used them as the basis of my first book.

As we all know, memory is fallible and often I was told different dates by different people - and sometimes I heard widely differing versions of the same story.

Where possible I found newspaper clippings, catalogues or other documents to clarify and support my writing. Through the 1960s and 1970s Crown Lynn published a series of newsletters which I was allowed to copy. I also seached out advertisements, which are an accurate record as they were prepared and placed by Crown Lynn.

However problems arise when you get two different newspaper articles which give differing stories and differing dates. Journalists often base their work on what they are told, and there are pitfalls in that approach.

My books were both edited at Penguin publishers, and my skillful and very thorough editors picked up inconsistencies in spelling and dates, for which I am forever grateful.

Sometimes even the internal Crown Lynn publications were in error. Ernest Shufflebotham, creator of the lovely 'Hand Potted' whiteware, was always called Ernie Shufflebottom, in every Crown Lynn newsletter and by all his workmates. It was only after he died that his family in England got in touch with New Zealand researchers and asked us to make a correction. This was too late for my first book, but not for my second.

After my books were published a whole lot more documentation was made available through the Richard Quinn collection which is now archived at Te Toi Uku, the Crown Lynn museum in New Lynn, Auckland.  Those documents include many catalogues and workbooks from the Crown Lynn factory itself.  They were gathered up by Richard Quinn and others when the factory was closing and was about to be demolished.

They give more accurate dates than I was able to discover, plus a whole lot of new information.  Much of this new info has been added to the wonderful New Zealand Pottery website by Ev Williams and her fellow researchers.

I also owe a debt of gratitude to previous researchers, in particular Gail Lambert/Henry and Olive Hale.