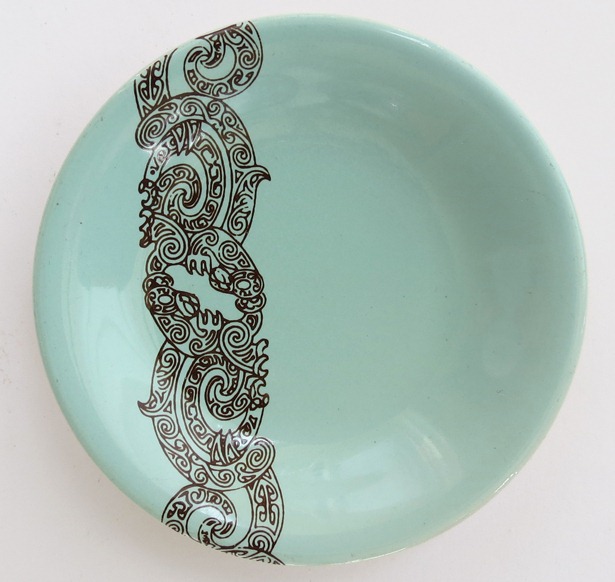 This Air New Zealand ware is truly lovely, and highly collectable. A while ago I met someone who has a whole dinner set. She wouldn't tell me what she paid, but you can guarantee that it is worth much much more now. The first design for this ware was gold on turquoise, but the gold wouldn't stand up to industrial dishwashers so they chose brown instead. This is what the backstamp looks like: 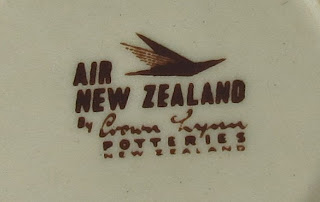 Later, in the late 1970s Crown Lynn made ware for Air NZ second class - the initial order in 1977 was 330,000 pieces. In dark brown with a subtle Koru emblem, it's quite classy but it doesn't tug the heartstrings like the turquoise. In any case they are far far superior to the disposable plastic that comes with the disposable food on airlines these days! 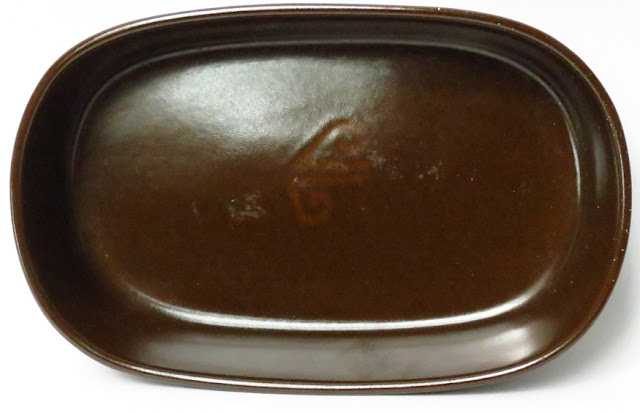 Often the dishes have strange long numbers and letters on the back - they denote specific aircraft, I have been told. 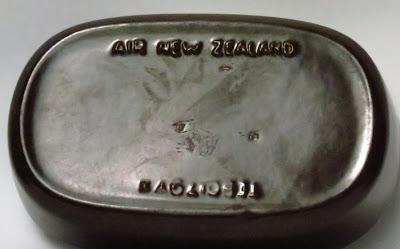 It pays to check before swooping on this ware in junk shops. Some was made in Japan - check the backstamp carefully! This is Japanese:

This is Crown Lynn. 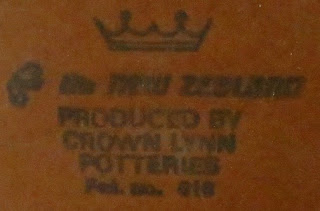 More collectable than the grim brown are Air NZ beakers and ashtrays, in honey glaze from in the Titian factory. I love their graphics, moulded into the shape. The beaker is 9 cm high, the ashtray about 20 cm wide including the handles.  I assume this is an ashtray, but then again it might have been a platter - can anyone enlighten me? 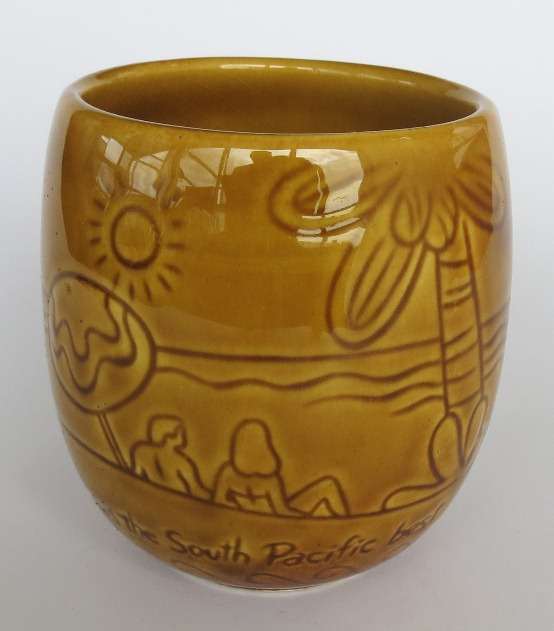 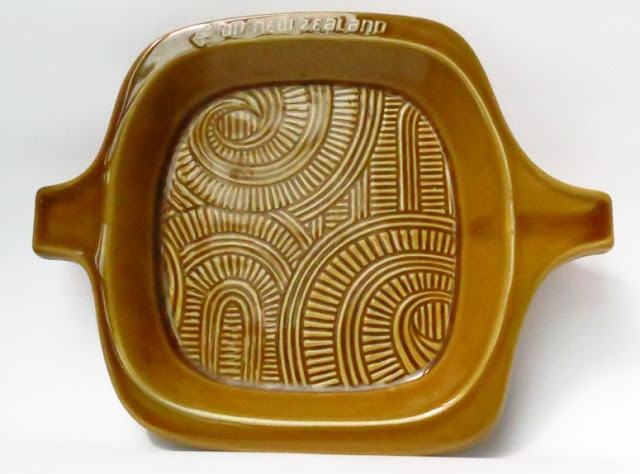 This is the base of the beaker. The only ashtray I have seen is unmarked. 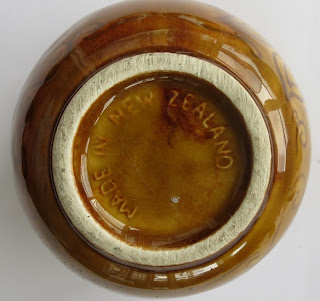 They also made a few beakers in a gorgeous lively green: 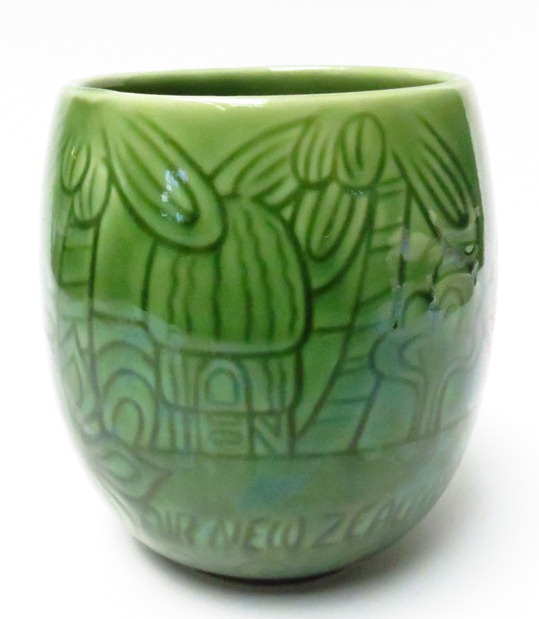 (Thanks to Ev for letting me photograph some of these items from her collection).
Crown Lynn also made ware for other airlines. This classic little casserole was for Qantas. The mini-casserole shape was used over and over again for all sorts of domestic and commercial ranges, they must have made millions of them. 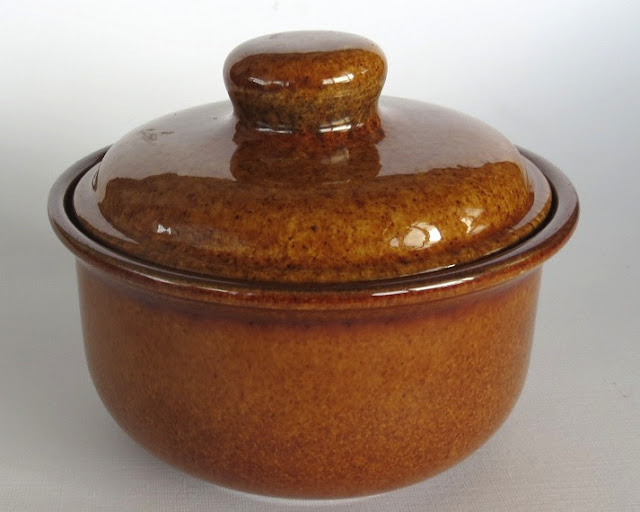 Note that the Qantas backstamp was applied separately to the Cook & Serve stamp - with no consideration as to which way up it goes! 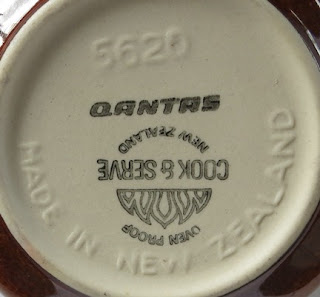 Here is a British Airways dish, the same shape as the brown one above. 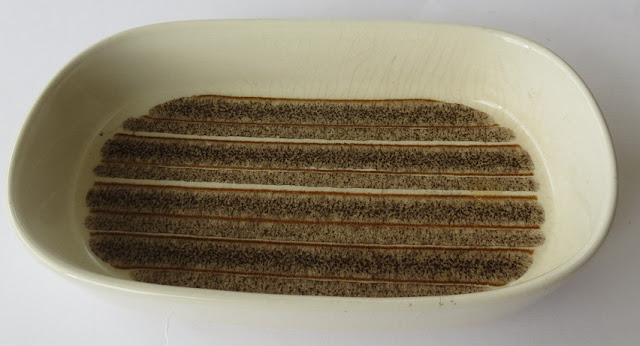 This is the backstamp: 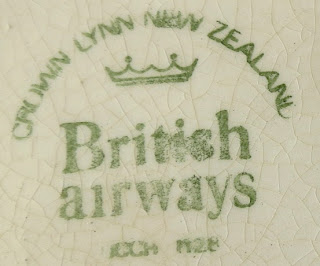 Last, I have a little mystery. This gorgeous hotel ware oval plate (also known as an ashet) is the same turquoise as the Air New Zealand ware. 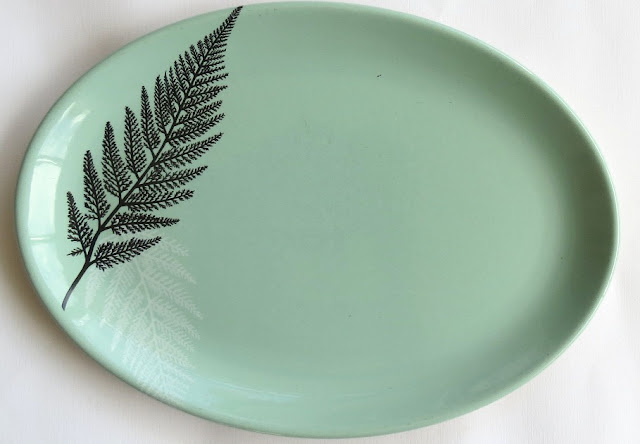 I have no idea when it was made or why. It has the standard vitrified ware backstamp which was used from around 1955-1970: 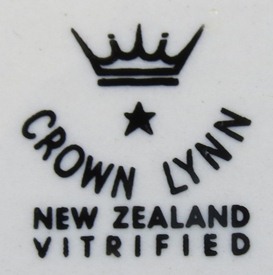 But it also has some impressed marks which I have not seen elsewhere.

AND it has a very fuzzy shape number (1631) also not usually seen on plates.

If anyone can tell me who this plate was made for, I would be most grateful. And if anyone has any for sale, I would be even more grateful! I would love a set of four for our motor home.

In the next couple of weeks we are moving house, so there will be a bit of a gap before my next post.
Take care meanwhile
ValM

Made in New Zealand... plastic!

This week I'm taking a brief break from Crown Lynn to introduce you to some of my lovely collection of  New Zealand made plastic kitchen jars, all picked up for a few cents in op shops.  This is my favourite: 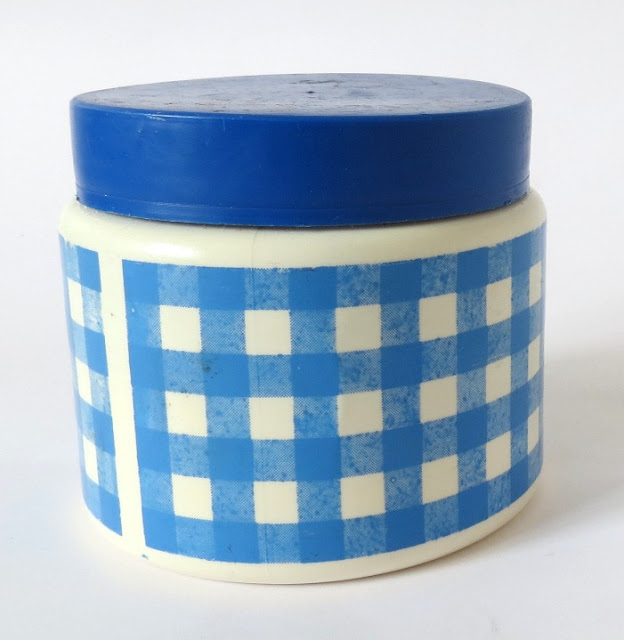 It's about 9 cm tall, and on the base it is marked Premier Pl.  Premier Plastics is still operating in Auckland, still making containers of various sorts. I also have a  brown jar in the same gingham pattern, I am not sure if there are other colours.

There were several NZ manufacturers of plastic jars as far back as the 1970s and 1980s. Each jar was moulded, then screen printed individually on hand-operated semi-automatic machines. There are quite a few different brand marks on the base of these jars. This spotted treasure is marked  Aunty Auckland New Zealand. It is tall, at 23 cm, and normally holds my couscous. 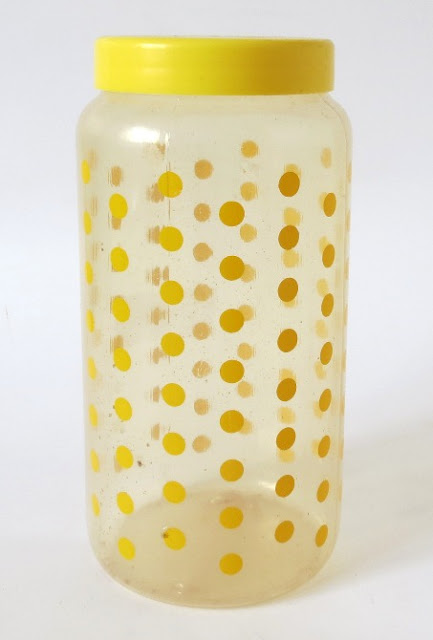 My rolled oats jar is also tall, made by Smiths Plastics which operated out of Newmarket. It is not marked on the base. The red and white blips are soap bubbles I believe. Smiths Plastics manufactured for Service Wholesale which were also based in Newmarket. 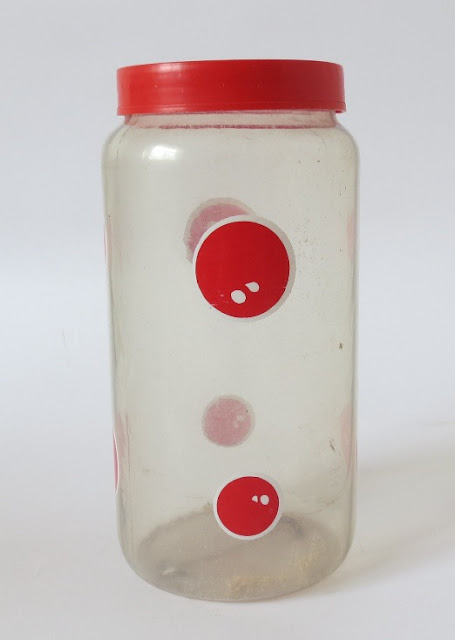 Another manufacturer was Nuon Industries; an upper case NUON is imprinted on the base of this jar with orange flowers. You may be able to see that the plastic has darkened slightly, a sign that it will not last for too many more years. Light very slowly but surely denatures the plastic, making it brittle. 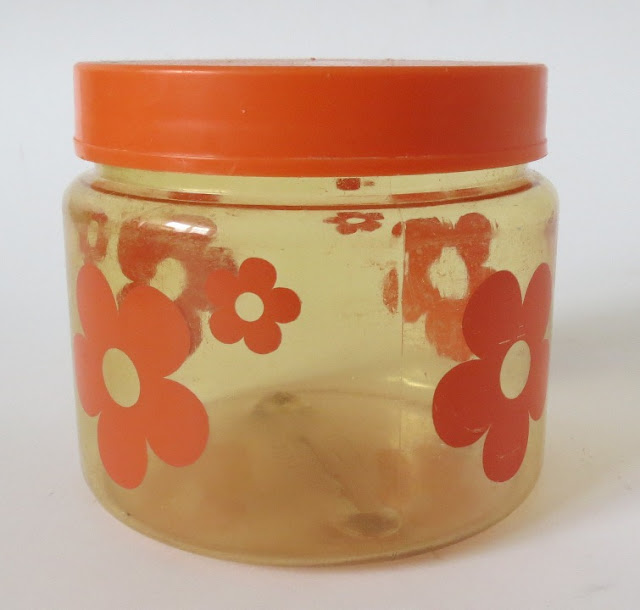 And to finish, here is one more classic: its barrel shape is the same as the glass coffee jars of the same era. This jar, made by Premier Plastics, appears with prints in various other colours and styles. 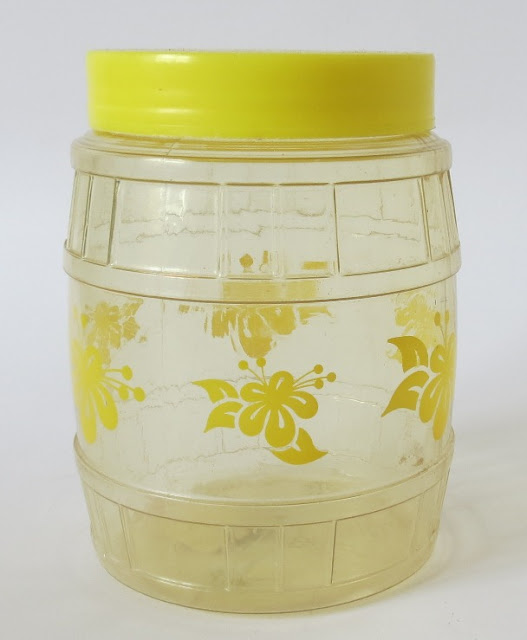 This is only a small selection of the range of NZ made kitchen jars. They came in all shapes and sizes, including a square version in various heights. They are not perfect - the screw tops are not airtight, and after many years of use the plastic is inclined to split around the top where the lids screw on.  They have no particular value at present, but they are a New Zealand product - a memory of a bygone age before so much manufacturing got moved to China.

Despite the offshore competition, not all is doom and gloom in the plastics industry. Several of the 1970s-1980s manufacturers still survive, though most are under new names and of course they're making different products. One highlight is Systema, a New Zealand company making a wide range of plastic containers and drink bottles which you will have seen in many shops and supermarkets. Often the name of the manufacturer and the country of origin is marked on the base or on the label. Check before you buy, and...
Buy New Zealand made!
Take care
ValM