I have noticed increasing interest in Crown Lynn whiteware vases - and a resultant increase in the prices people are prepared to pay!

This is my latest find. I picked it up for $1 in a charity shop and was astonished to see one go on TradeMe for  $385. Personally I think it's interesting but not outstanding but obviously these vases don't come on the market very often. There are other animals of this type - a wee deer, calf and lamb,  shapes 210 - 213. This little horse is 11 cm tall. The legs are hollow. It is unmarked. 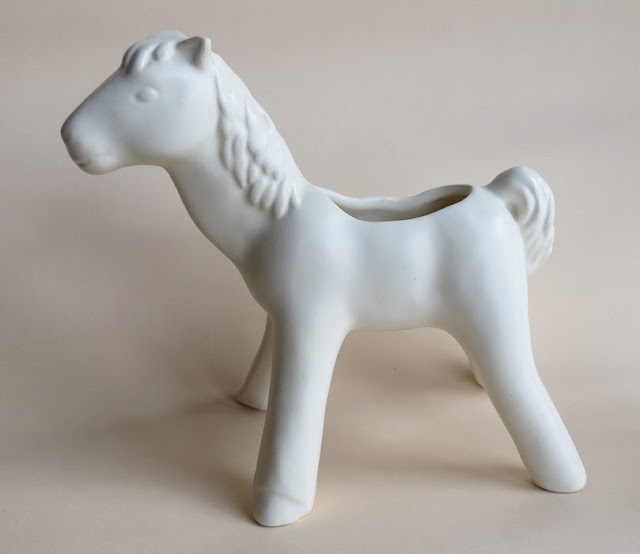 A new treasure is this hand potted Ernest Shufflebotham vase, which I bought to reward myself after I finished my second book. 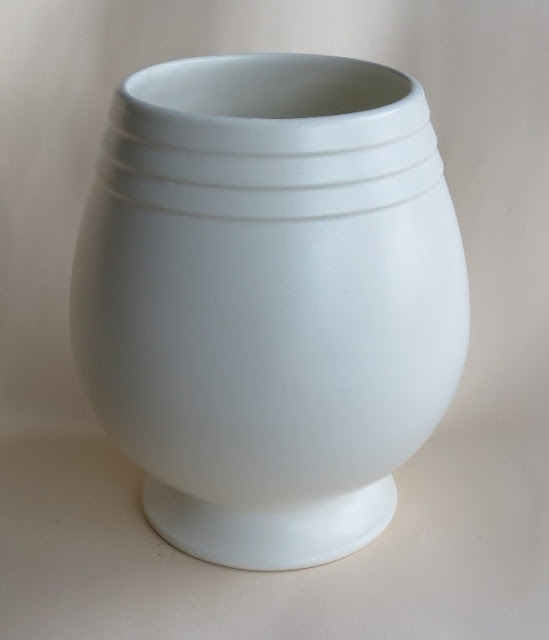 On the base it has the 'Hand Potted' mark, plus a hand inscribed shape number 5. Ernest Shufflebotham left Wedgwood in England in 1948 and worked at Crown Lynn until about 1956, but his vases were advertised for several years after that, most likely because there was a stockpile in the warehouses. Earlier publications, including Crown Lynn newsletters and magazines, incorrectly referred to 'Shufflebottom' but his English descendants pointed out the error a few years ago. 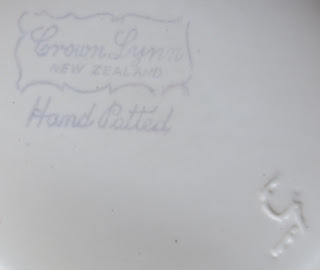 Most Crown Lynn whiteware is slipcast rather than hand potted.  This 'tree' vase belongs to my sister and I guess I will have to give it back sometime... but meanwhile it looks great on my shelves. It's about 20 cm tall, shape number 585. 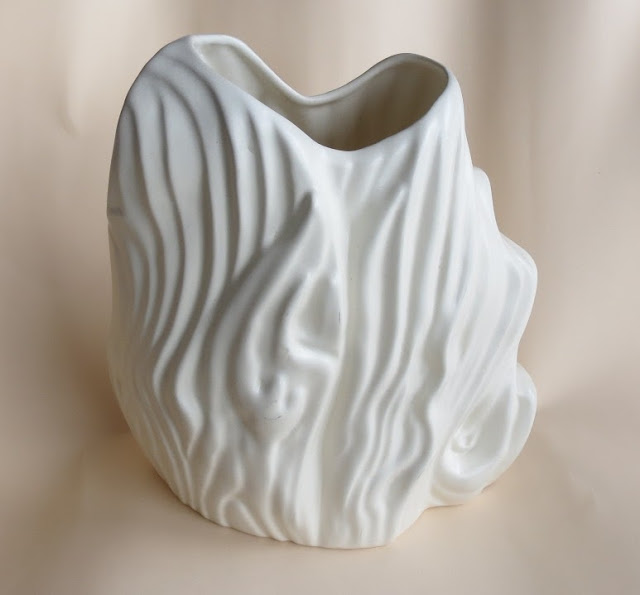 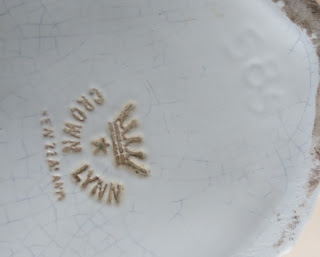 My favourite whiteware vases are the geometrical ones - this photo is by Studio Lagonda, from my first book. I borrowed these vases to photograph about seven years ago; I should have bought some while they were still available at reasonable prices! 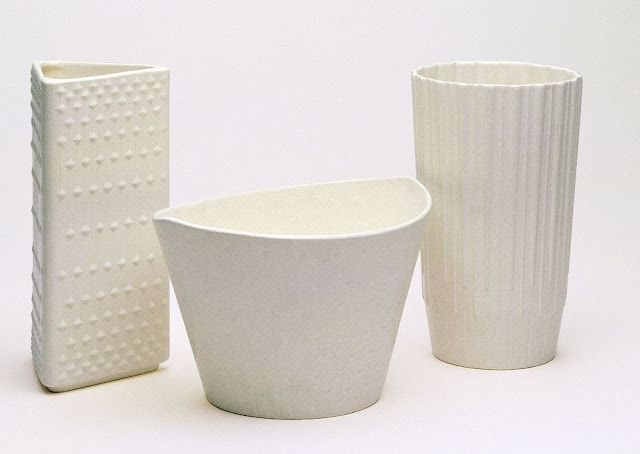 This gorgeous specimen I do own - it came from my brother-in-law who worked in the Crown Lynn engineering department for a few years. It's quite large at 16 cm tall and 36 wide. Its simple elegance has grown on me. It is number 360. 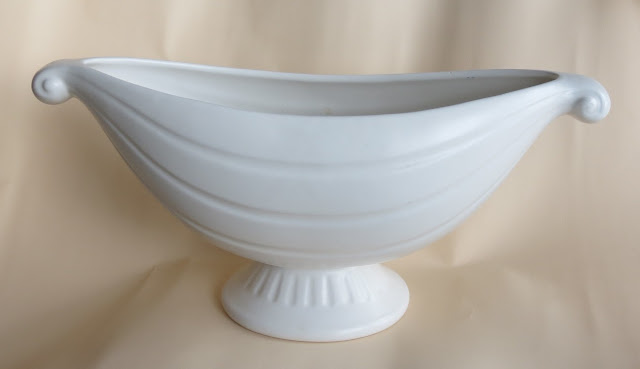 You sometimes see all these whiteware vases in other colours, mainly pastels. Pale green is probably the most common.

Crown Lynn whiteware came with a variety of marks. Some were numbered only, others bore marks such as Flair Art Pottery. This wee vase, number 362, is 12 cm tall. 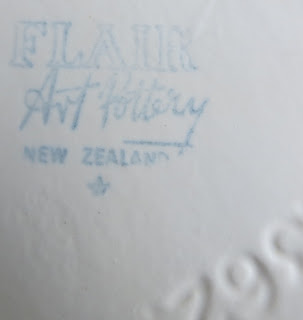 This one is much larger at 14 cm tall and 27 wide. I love its crisp lines. I also have a smaller version in this pattern, cute but not as stylish. 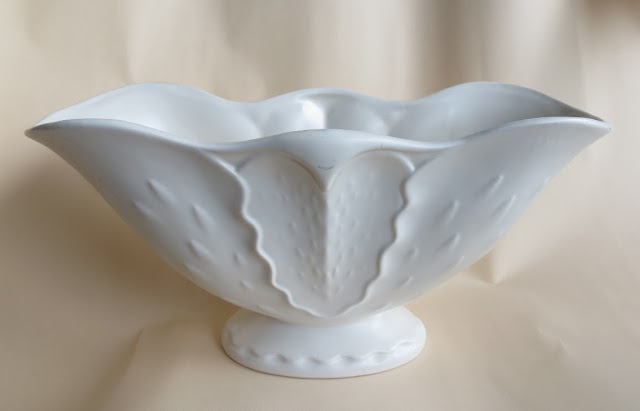 It is number 605 and carries the Kelston Potteries mark.

This ikebana vase has a Flower Beauty sticker. You also sometimes see this shape in black or brown.

The later vases, post-1964, have four digit shape numbers. This Grecian style specimen is 22 cm tall; there is also a taller version. The number on the base is 2082. The vase also carries the imprinted Made in New Zealand which is so familiar to Crown Lynn collectors. When I first found this vase it was spray painted with gold around the handles and base. George restored it to its former glory by removing the gold with petrol. This vase was almost certainly made in the Titian factory after it was taken over by Crown Lynn. The glaze is shinier and 'harder' looking than the finish on the other vases I have shown.

There was great excitement when Crown Lynn developed its first white glaze. It was described in an internal staff newsletter in 1948 as having 'a nice texture reminiscent of birds eggs of one's youthful pilfering.' 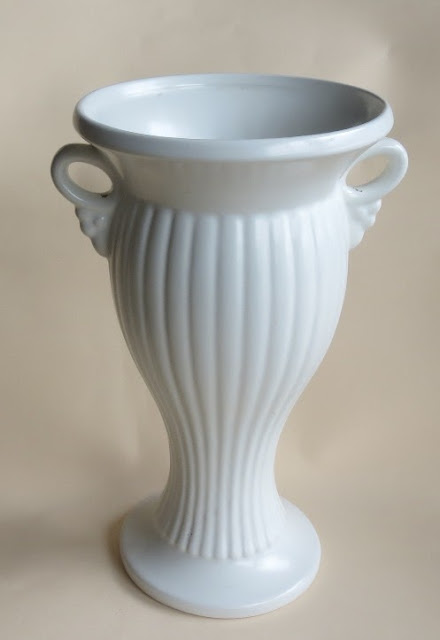 I can't write about whiteware without including the swans, which seem to be attracting a lot of interest in recent months. But what is there not to love about this serene beauty? 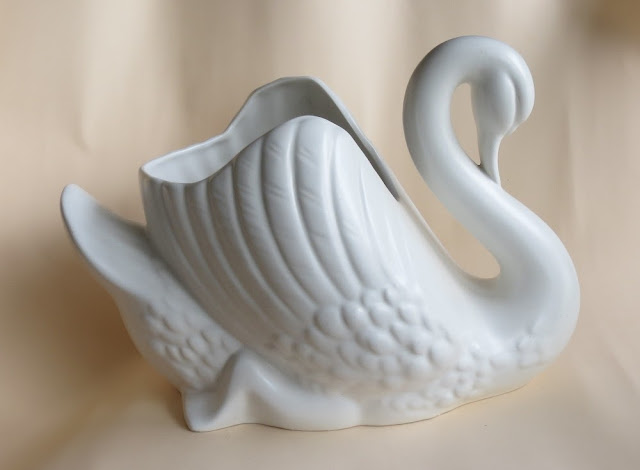 She is impressed with the number 170 but there is no Crown Lynn mark. Her opposite number, the so-called male swan, has both the number 170 and a Crown Lynn backstamp. These swans are also sometimes found in trickle glaze - they will have been made before the white glaze was developed. 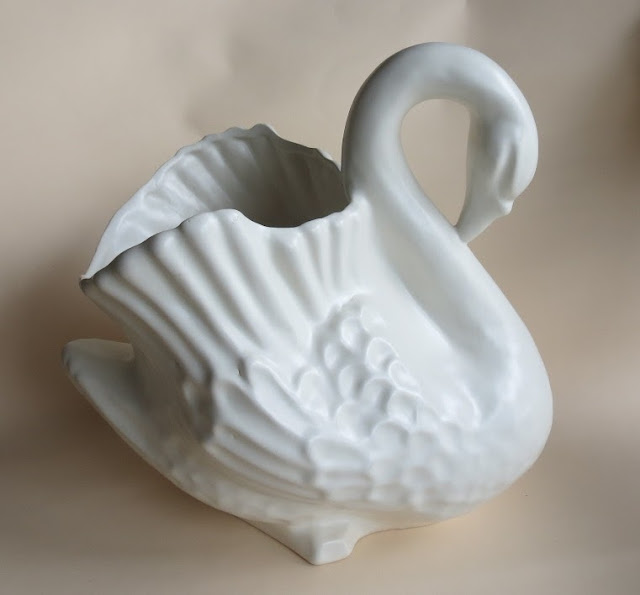 This one also has a mysterious 'F' incised into it... presumably someone wanted to keep track of it when it came out of the kiln. Quite often you find odd marks like this on the base of Crown Lynn products. 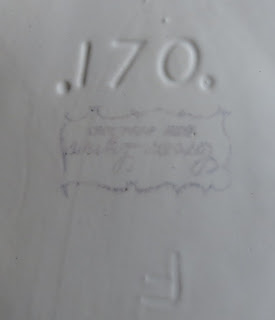 Now... my question for the day. Why is it that both the large male and female swans, which are quite different in shape, have the same shape number? Every other Crown Lynn artware shape has its own individual number - the small and middle-sized swans have separate numbers.  I don't have a clue why these two large swans have the same number, and wonder if anyone else can help.